It’s Prom Season again. Every year about this time social media feeds fill up with pictures of seniors in high school who clean up in ways we could never imagine. Some of them actually look like real people! A tradition has grown up in our social media culture: asking celebrities to prom. There was even a TV show called “Once Upon a Prom” where people applied to have a celebrity take them to prom. Shaun White, Olympic Gold Medalist Snowboarder, was the target of an elaborate invitation plan with a video, a poem in honor of the invite and some well-timed tweets. Carly Monzano, who attended an all girls school tried her best, but got no response. On prom night, Shaun crashed the party with his band, played a few numbers, then danced with Carly and posed for lots of pictures.

Carly and Shaun lived in different circles and except for this “promposal” would probably have never met. We all have our circles, don’t we? These days, we don’t even know our neighbors because we don’t walk around, we don’t talk with the people outside. We may wave at them in passing, but we don’t really know them because our circles are different. We go to different churches (or don’t go), we have different jobs, and we have different hobbies so our paths don’t meet. It’s not that we don’t like the other folks, it’s just that our paths don’t cross. Peter had a different problem. There were people that he couldn’t meet because the religious law forbade it. Then God. “He said to them: ‘You are well aware that it is against our law for a Jew to associate with or visit a Gentile. But God has shown me that I should not call anyone impure or unclean.’” (Acts 10:28)

Jews and Gentiles did not mix in the days of the early church, especially if those Gentiles were Roman soldiers. Oh, if the Roman soldiers, or any other Gentiles appreciated Judaism enough that they were civil and donated money, they’d let them sit in the back of the synagogue, but they wouldn’t go out to Luby’s together after the Sabbath Service. So, when Peter took a nap before lunch, ok, the spiritual way to put that is that he went to the roof to pray and fell into a trance, his vision was disturbing. In the vision, God showed Peter all the animals that he wasn’t supposed to eat and told Peter to pig out, so to speak. Peter wasn’t sure what to make of the vision, but then the Spirit told him that three guys were waiting to speak to him. He may have been happy to skip lunch that day. The three guys told them the story of Cornelius, one of those Roman soldiers who was good, and the vision he had from God that told them to look for Peter at this house and bring him to Cornelius. Peter showed up and began his “how to win friends and influence people in the Gentile world” tour by letting them know, that “I’m not supposed to be here, but I can’t call you insulting names, so, what’s up?”

An interesting thing about the Bible is that an admonition to any person usually applies to all of us. For instance, when Jesus told the apostles to go into all the world proclaiming the gospel, the message wasn’t limited to the apostles – we have inherited the same command. When God tells Peter not to turn his nose up at other people, we get the same message. While we pay lip service to that idea, how often do we look down on people in, and out of the church? We think they don’t realize it, because we hide it so well, but they do notice. Perhaps we look down on them for their sin because it’s different from ours. Perhaps we look down on them because their life situation is not as good as ours, often because of the sins of others. We look down on other people for two reasons: 1) we don’t see them as God sees them; and 2) we don’t see ourselves as God sees us. Maybe if we realized the mercy and grace God has shown us and realized that God shows that same mercy and grace to others, we’d be able to see them as God does and walk alongside them instead of looking down at them.

Oh Lord, how often do I think too highly of myself, too little of others, and not enough of You. Help me to fix my eyes on You and love others as You do at all times.

Edit: Been trying to get this pic to show in the comments, but it isn’t working right. I’ve sent a link back to the creator. I hope that’s ok! 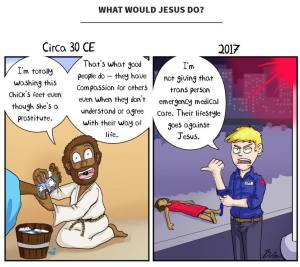 I am a retired Middle School Teacher. I share each day what God is teaching me from reading His word hoping that people can benefit from reading what God has taught me.
View all posts by rockyfort →
This entry was posted in Devotional Thoughts and tagged all the world, Carly Monzano, Cornelius, different, Gentiles, God, Grace, high school, impure, Jews, Judaism, look down on others, look to God, mercy, Once Upon a Prom, Peter, proclaim the Gospel, Prom, religious law, Romans, Sabbath, see others like God sees them, see ourselves like God sees us, Shaun White, synagogue, unclean. Bookmark the permalink.
Loading Comments...
%d bloggers like this: